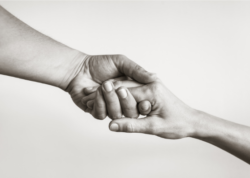 Like millions across the country, we at Access Living were deeply shocked at reports of the two mass shootings in El Paso and Dayton this weekend, building off the shooting at the Gilroy Garlic Festival. Here in Chicago, we also saw a fourth mass shooting with seven wounded in a shooting near the Douglas Park playground. Of course, these are only a continuation of a national trend not only of gun violence but of the complex dynamics of not only white nationalism but white privilege, and the deep inequity facing so many segments of our communities nationwide.

From a disability standpoint, we feel compelled to remind readers yet again that it’s critical not to fall back on blaming mental health issues for our national crisis. Being racist is not a mental health issue. It is deeply essential for anyone in leadership positions to talk responsibly about mass shootings. That includes not conflating racism or xenophobia with mental health issues. Where the two are conflated in public rhetoric, deep damage is done to our communities, NOT repair. We can do better than this! One step is to educate yourself if this is something you don’t know much about. Use responsible language!

Check out these links from disability writer or groups on mental health and gun violence:

Also from a disability standpoint, it’s important to call out the deeply eugenicist nature of the white mass shootings specifically. Eugenics is the movement to “improve” the human race by supporting those with desirable social traits and “weeding out” those with undesirable social traits. Eugenics is inherently anti-disability, racist, xenophobic, and homophobic among other things. It is often used as a screen by white nationalists to justify rhetoric and actions against “undesirable” groups. The racist mass shooting in El Paso was particularly an example of a fundamentally eugenicist effort.

As a country, and as advocates, we have to remember at all times what Audre Lorde once said: “There is no such thing as a single-issue struggle because we do not live single-issue lives.” All of us can do our part to address massive structural inequities based on white privilege, and to push back against people who want to commit very intentional and deadly acts of white supremacy. Disability cuts through all our communities—both oppressors and the oppressed. We at Access Living remain committed to working against oppression and white privilege in solidarity with people of all oppressed groups. We call on our civic leaders to join us, and appreciate those who are leading the way.

The legacy of our dead and wounded demands no less.